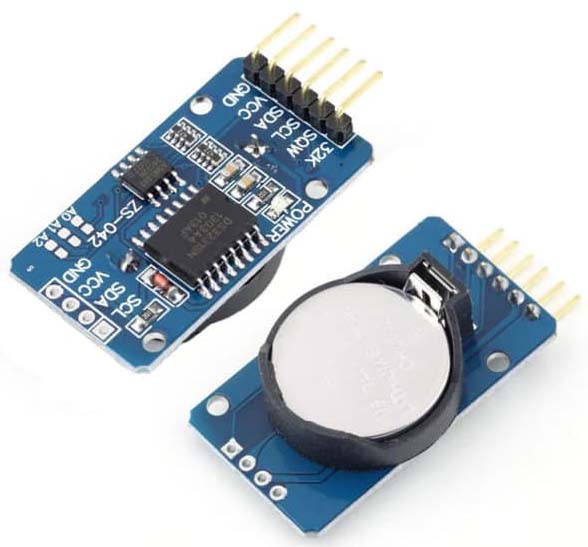 Some electronic circuits require a clock with a certain frequency to be able to work, for example, a microprocessor/microcontroller system and a synchronous digital circuit. In this article we outlined several clock sources with various accuracy.

In brief, commonly used clock sources are as follows:

Here is an example of a series of oscillators with active components transisto[sumber]r.

Here is an example of a relaxation oscillator with an active component op-amp. [sumber]

The crystal frequency value is generally expressed for certain temperatures. The physical size of the crystals is affected by temperature, so if the temperature changes, the frequency of the resulting clock signal also changes.

Here are examples of crystal components[sumber]

Here’s an example of a crystal physical form[sumber]

To be able to generate a clock signal, crystals still need to be connected with several components. Examples of crystal-based oscillators such as the following[sumber]

The usual crystal oscillator has weakness, which is the frequency value still changing against the temperature. To overcome this, it can be used crystals whose frequency is compensated for temperature changes. This component is referred to as Temperature Compensated Crystal (TCXO). At TCXO, compensation is made analogous to adding a certain series.

There is also digital compensation by adding microprocessors, with Microcontroller Compensation (MCXO) technology.

TCXO and MCXO are already available in the form of modules, making it easier to use.

The popular TCXO example is used as the real time clock is DS3231 from Maxim Integrated. DS3231 is sold in the form of modules that are already equipped with a Lithium battery so that the time stored in it is not lost if the power source is turned off.

In this type of oscillator, as a source of frequency used crystals are maintained with a temperature control system. This system is also called as Crystal Oven or Oven Controlled Crystal Oscillator (OCXO)

OCXO dimensions are quite large, because in it there must be a series of heaters, temperature controllers and insulators so that the temperature is stable.

If the accuracy of the OCXO crystals is still lacking, the precision can still be improved using the help of GPS signals. This system is referred to as GPS Clock or GPS disciplined oscillator (GPSDO).

The clock circuits have various accuracy , drift, power and weight. We must weigh those factors when we choose suitable clock source for our electronic system.

This site uses Akismet to reduce spam. Learn how your comment data is processed.